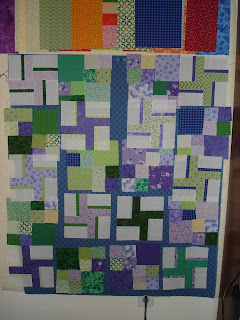 Has become this much neater mess: 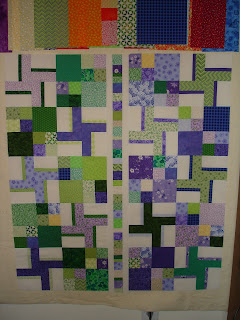 over the course of today.  And because it's only 8-ish, I think I can get it basted and ready to quilt before being forced to turn in.

Exhausted from having to piece a millionty squares, and back at the drawing board because my original plan yielded a quilt that was a few inches too big for the intended backing, I almost scrapped the center motif.  I'm really glad I didn't, because it's pretty much the only thing giving any sort of visual order to this quilt.

On my last couple designs, I've struggled with the issues of light vs. medium vs. dark fabrics, and the problem is in clear evidence here.  I think that for what I'm going for to be successful, I need a variety of fabrics in narrower values ranges.  This quilt is based on the idea of a 10-patch square, two four patches and two larger squares, with two or three of those smaller squares being a different color and popping out from a monochrome-ish background.

My monochrome-ish background didn't happen, because the values are all over the place.

There are three yellow patches, which you can probably pick out, but which are pretty close to that pondscummy green and which therefore blend a little more than I'd like.  And I don't even like that pondscummy green, aargh.  I just didn't have enough different prints in the blue-green.

"Modern" quilting seems to involve working with many different prints from a single line, which all or nearly all involve multiple colors in one fabric.  Rather stark patterns with clear geometric figures and plenty of white set off this nicely-coordinated group of fabrics.  I don't want to go totally for solids, because I like little prints, but what I've been doing so far with my stash hasn't really been working.

I'm definitely going to finish and keep this one, because it has many fabrics that I love and is just the right size, but moving forward is going to require some re-thinking.
Posted by MTB at 8:40 PM No comments:
Labels: design, fabric, quilting

Victory of the Week

This week tried really, really hard to prevent me from finishing the purple whirlygig quilt, but I finally prevailed: 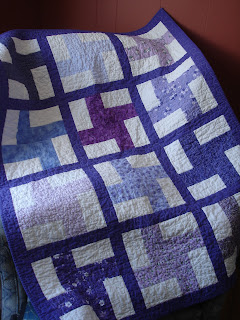 and it's now up in the shop.  On to other things, none of which, speaking of them, have moved forward at all.  This week was evil.  I think it was the supermoon.

I've been dreaming of summer, when the house might actually be warm, and a time that will call for a light little quilt (well, okay, a light freaking gigantic quilt) on the bed, rather than the down comforter.  This is entirely an abstraction; two mornings this week we've awoken to thin but fresh layers of snow, and yesterday morning it was twelve degrees on my porch.

So yes, I've been thinking about that quilt, and maybe basting it will finally happen this weekend.  The back is still in 26 pieces, and the two really big pieces of backing haven't exactly been ironed yet.

That was a whole thing.  I've never been on well water before now, but after several months of my iron acting very weird and inconveniently spitting out this dirt-ish, gunky stuff, it dawned on me that hey, that is actually dirt.  Dirt that had been separated from the water that carried it when that water turned to steam inside my iron, then seeped out and got intensely heated over and over again, forming an angry cake of burned dirt on my iron.

This did not dawn on me until a couple of months after trying several internet iron-cleaning suggestions involving salt and baking soda and elbow grease that barely touched the problem but did leave a helpful coating of steamed baking soda that caked out of the iron's little steam holes every now and then.

Also, there's been a piece of plastic (or something) rattling around the inside of my iron ever since it fell off my table about 5 years ago.  Just so you have the full iron picture here.

So anyway, I get wise and figure out that pouring dirt water into my iron is a Bad Idea and that perhaps buying some kind of Official Iron Cleaner is a Good Idea.  I got this Dritz stuff that you use while the iron is hot and it totally worked and also smells good in a way that makes you suspect that it's just mowing down your brain cells left and right, like gasoline or curing vinyl.  I also committed to just getting gallons of store brand spring water to use in the iron, and the iron has been happy and non-dirt-spitty ever since.

Hope I just solved all of your well water + misbehaving iron problems.  Or maybe you're smart and are just wondering how I've managed to finish a presentable quilt at all.
Posted by MTB at 8:38 PM No comments:
Labels: quilting

New on the Design Wall 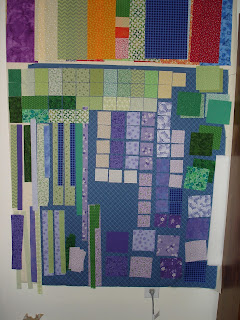 The top part of that picture, with the colorful mess, is for the back of the gorilla. The bottom part is going to become a purple and green top.  It turns out I have a lot of green fabric.  Not so much with the purple, but enough to eke out enough bits to make this top sufficiently patchy.  I hope.  There's always this part of the design process where I realize with a crash how different things look when in fabric than in colored pencil on graph paper.

For this quilt, a duplicate will not go into the shop, so I've abandoned any attempt for commercial appeal.  The back of the quilt will be that medium blue plaid that matches positively nothing on the front.  Because I like it.

I've been reading all about curved edges from a blogger that I can't quite remember off the top of my head, so I'm thinking that this one will have curved edges.  Why not, right?
Posted by MTB at 8:10 PM No comments:
Labels: design, quilting

After a trip to JoAnn's,there is now Kona cotton in Imperial Purple outlining all the blocks, and the top is done. 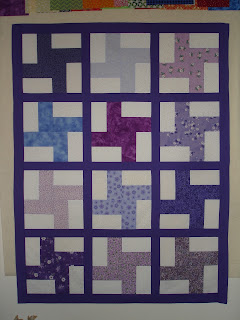 Now to smush with the batting and backing, for which I chose a nice purple with butterflies and flowers.  It came out to be about 40"-ish by 50"-ish, but I don't plan to pre-shrink the batting this time, so it will probably lose some length in its first wash.  I haven't been able to go to Art Day for a long time, but am making the trip back next weekend, and my goal was to have this to take with me and quilt.  Looks like I might be into another top by the time I get to quilt this.  That's good, because it will give me time to figure out what the best quilting pattern might be.  Right now I'm at a loss.
Posted by MTB at 6:20 PM No comments:

Greetings!  It's Saturday, which means quilting is happening again.

Sometimes I marvel at how quickly something can go from a sketch on the page to pieces on the design wall: 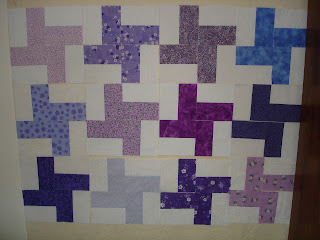 In this case that may not have been such a great thing, because about five whirlygigs into this quilt, I thought of a modification that might add some interest to this rather basic top.  Oh well, another quilt for another day.

When I was quilting several years ago, I built up quite a nice, pretty diverse stash.  It's rather short on light brown fabric (although I think in general the world is pretty short on light brown fabric) as well as pieces big enough to serve as backings.  So deep into the planning of this quilt, I realize I don't have anything for the back that would match or coordinate or look decent.  And most of the pieces of fabric that are represented here are getting pretty small.  Maybe there isn't even something suitable for the binding, although there's a weird not-purple-not-blue polka dot that there might be enough of for that.  A quick stop at the fabric store yesterday yielded a fat quarter of one of the purples you see here, as well as a good chunk of plain white fabric, but if I used that for the back I'd be right back in the same place of not having any for the quilt tops that I need white for. Also, plain white backs are boring.

The values quilts (one of which is now in the shop) were all from stash, every fabric and thread of them.  Using a fugly dark green jungle (?) batik for the back of the one I'm keeping allowed me to use only stash, and because I intend it to be a wallhanging, that worked out well.

So I'm thinking maybe this quilt needs some dark purple sashing and an interesting print for the back.  I also seem to have exhausted my stash's supply of unique purple prints for whirlygigs, so either I need more of those or the plan for this (square) top needs to be scuttled or significantly modified.  Not sure yet what I'm going to do, but a trip to the store seems to be in order.
Posted by MTB at 3:40 PM No comments:
Labels: design, fabric, quilting

Oh wow.  Most of our snow had melted and the driveway was ice and puddles yesterday morning.  Then rain turned to snow, about 26 hours ago, and it's still snowing.  Really really hard.

Which means no work for me, no leaving the house, even, which means lots and lots of quilting.  I finished the values quilts, both of them, and mine is ready to hang.  Or, because I neglected to sew on hanging sleeves, tack to the wall.  I love sewing the binding down by hand, but hate sewing on hanging sleeves.  Not super logical, but that's how it is. 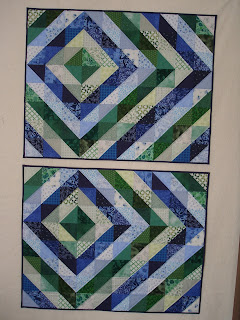 They're in the wash now, probably being ripped to shreds and bleached beyond recognition.  (Why do I think the washer is out to destroy my stuff?  Hard to say, but the belief hasn't faded after one successful washing.  Maybe two will do it.)

Knitting is also happening!  This is my Multnomah shawl: 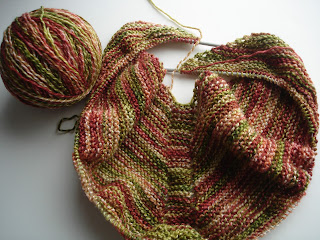 Not sure what to do now.  My gorilla quilt could use some work - I've got a bunch of pieces cut for the backing, so maybe putting that all together is up next.  I've got a couple more quilt designs in my head and ready to go, except I need more white fabric.  Will probably make Connecting Threads my go-to for solid white.  I used that for Cartoon Pinball, and it's surprisingly soft and not as sheer as the Kona muslin I used for the gorilla.  But unless they can beam it here, there's not much to get done on new tops today.

I'll do my best to get the values quilt up in the shop today, assuming it survives its bath.
Posted by MTB at 12:49 PM No comments:

I've finished binding Cartoon Pinball I, and it's in the dryer now. 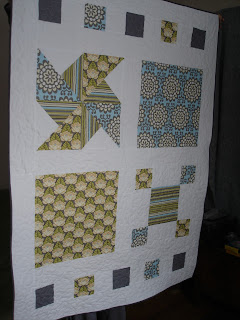 I took these pictures before throwing it in the washer to prove that it really did exist, and really was finished, just in case it got destroyed or shrank to the size of a coaster or slipped into a wormhole in the universe through a portal in our washing machine. 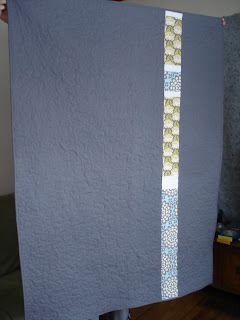 It will go up in the shop just as soon as it's dry and I have some shopworthy pictures of it.
Posted by MTB at 10:20 AM No comments:
Labels: design, quilting
Newer Posts Older Posts Home
Subscribe to: Posts (Atom)