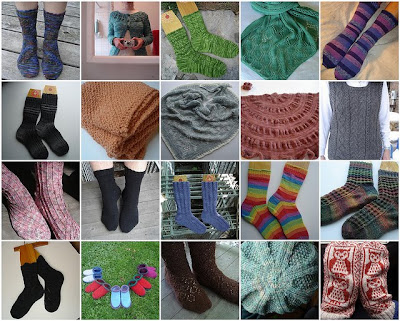 courtesy of big huge labs
Posted by MTB at 12:29 PM No comments: 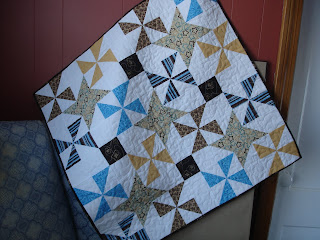 Greetings, dear readers! I hope your various holiday celebrations were untaxing and free of disaster.

Today I will be show-and-telling you about my most recently completed quilt, for which I do not have a catchy name. (Edit: it is now called "Spin the Stars.") 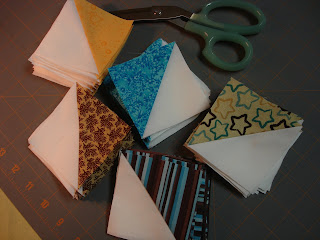 This particular arrangement of pinwheels and friendship stars is my own design. I made it up during a recent spate of, shall we call it, captive free time. 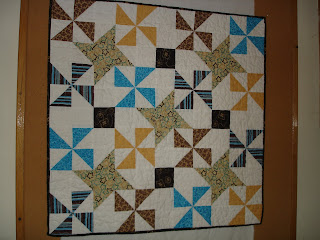 This quilt came about the way most of them do, which is that I piled a bunch of fabric together and put it out of the way, and when I came back, it looked so nice together that I had to make something out of it. 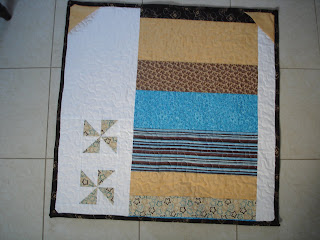 This is my first pieced back, which features most of the leftovers from the front, plus some whoops-wrong-size triangle pinwheels. This is also my first time using corner pockets rather than an hanging pocket or two sewn on after the binding. I'd avoided using them because I was wary of hand sewing through two layers of pocket, two layers of binding fabric, backing fabric, and batting. This time I decided to use a thimble for sewing the binding down, and it worked just fine. 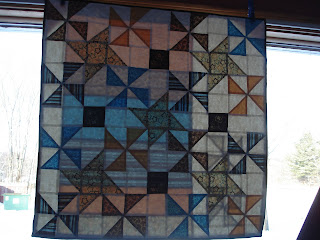 Brown, turquoise, and yellow aren't really my go-to colors, but I like the finished quilt well enough. While stippling it, my machine really started to fritz, so it's going to the shop for some attention. I successfully free-motion quilted a quilt about this same size a couple of years ago, so I'm hoping that the machine will be able to attain its former glory.
Posted by MTB at 6:48 PM No comments:
Labels: quilting 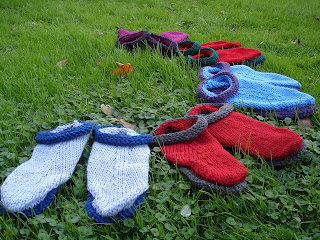 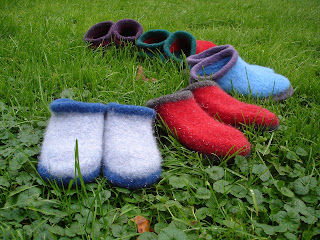 This project stalled for a while because I couldn't find the razor I use to shave felted things. It was with the office supplies, of course. Silly me.

These are some cheerful socks that I knit for Mom's birthday. They're delightful. 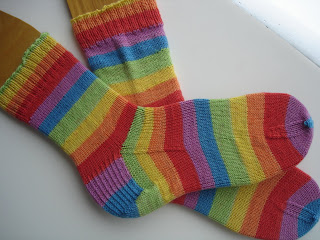 I finished the mini quilt today, and it's washed and dried and hanging on the wall, but I'm going to save that for another post. For now, it's back to the Christmas conundrum of what to give to three guys who have accumulated a bevy of handknit stuff over the last few years.

At the moment I'm set on Garmin pouch things, like I made awhile ago. I'm set on the fabric for Dad's, but I can't find a good contrast fabric: 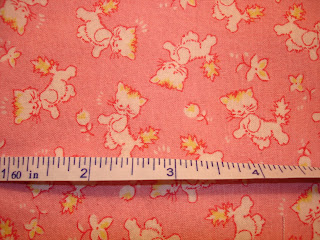 Haha, that was a little joke. I've got the perfect stuff to go with this -- it's purple, with butterflies.

These jokes are about how freaking impossible it is to find nice, interesting fabric that's also suitable for guys. And also an exploration of what on earth could've possessed me to buy not one but two lengths of pink kitty fabric when I like neither pink nor kitties. (One's not my style, one I'm allergic to.) I wish I could go back in time and tell myself to grab some more Lotus or maybe some pretty solids.

Hey, fabric designers! Make millions by designing nice, masculine fabrics! Or maybe changing cultural norms of what appears too feminine for men would be better. But probably not as profitable or manageable.
Posted by MTB at 4:55 PM No comments:
Labels: fabric, knitting

Santa's Little Sweatshop, as my husband lovingly calls it, should be in full swing right now. And it's in partial swing, it is, it's just that I took a little break, that's all. 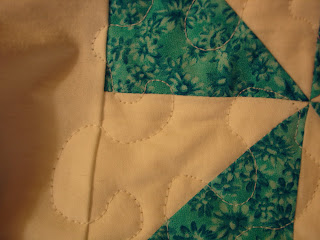 That picture is of the best part of the quilt so far. If you don't look at that picture full-size, you might be fooled into thinking that I'm marginally competent at this. But good gravy, I suck at free motion quilting. 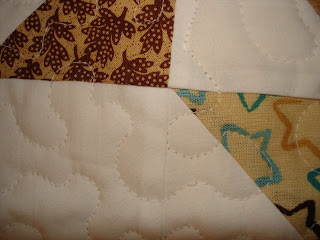 Skipped stitches, jerky corners, thousands of stitches and no two the same length. I mutter curses, squint, fantasize about shellacking all of my textbooks into a makeshift extension table for my machine, and free motion away. The only thing I'm good at with regard to this is managing to not burn the house down. And I'll go ahead and admit that I'm okay at not burning the house down even when I'm not free motion quilting.

Oh, and so far I haven't sewn either of my quilting gloves to the top of the quilt. Should get bonus points for that.

It does pain me a bit to suck so badly at this. I want to be good at it. I sit there and end up focusing on how badly things are going and how difficult it is.

So this is my post reminding myself and anyone else trying to expand their skills that being terrible at things at first is just part of the process. My first knitting projects were total, utter disasters. The only reason I'm now able to produce garments that I feel comfortable wearing in public is that I kept trying. I didn't let that sad clump of green chenile, full of infuriating mystery holes and literally so tightly knit that it was impossible to get a needle into the next stitch, determine my fate as a knitter. Jimi Hendrix played guitar for 17 hours a day. He had loads of natural talent too, but he worked at it until his fingers bled.

It helps that when I'm not working on this quilt, I want to be. Even though actually working on it is frustrating and disheartening, it's hard to put down.
Posted by MTB at 5:34 PM No comments:
Labels: quilting 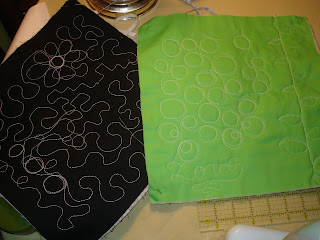 I know what you're probably thinking - you're thinking damn, girl, those are one hot mess. And I'm agreeing with you, and then I'm all like, or maybe even just a mess. Is the "hot" in "hot mess" supposed to be a good thing? Like, you're a mess, but you're still hot? Or is it just an intensifier of the concept "mess..." and then I realize that you're just waiting for me to stop talking, so I say, in agreement, for shizzle. I am suppressing a Snoop Dog joke right now, you can tell.

Against your better judgment, you say, "why are we talking like we're hosting TMZ?" And I say, I don't know, probably because quilting is even more grandmotherly than knitting, so we're trying to jazz it up a bit. And you say, and probably also because you've been listening to that radio station. And I am kind of embarrassed, because you're right, so I just say yeah, instead of for shizzle. 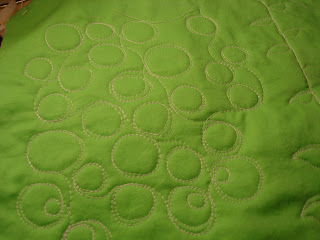 Anyway, the free motion advice is always practice, practice, practice, practice. But all the posts I see feature beautiful, accomplished, close to perfect quilting, so I'm sharing my first-try in several years squares. I made a zillion of these sandwich squares for the free-motion quilting class I took awhile ago and then didn't use up. I'm planning to stipple this little 30x30 quilt in progress, so I started with that on the black square. Then, after about ten seconds, I got bored, as you can see. Tried square-ish stippling, then hey, flower!, then circles. The circles seemed to go pretty well, so after the vine and leaves, I tried some more of those, then threw in some olives, which I just made up.

It's kind of coming back to me, and I plan to keep this mini quilt, so should probably just have at it. It's all basted (safety-pinned) and ready to go. Will probably bite the bullet tonight. On the up side, I've learned that things tend to look better on the internet than in person, so that should help my confidence.
Posted by MTB at 6:31 PM No comments:
Labels: quilting
Newer Posts Older Posts Home
Subscribe to: Posts (Atom)