The Psychology of the Sockyarn Blankie

I've got a pile of projects on the needles - a stocking for baby, a lace pattern blanket for baby in a linen-cotton blend, a Citron Shawl for my supervisor (who, when unbeknownst to her I am staring down about 8 more rows of 500+ sts ruffled edge, remarks to someone how jealous she is of my handknit armwarmers - arg), a separate pile of Christmas knitting, etc. - and all I can think about at this moment is my Sockyarn Blankie. The blankie I started years ago and have been chipping away at here and there for what seems like eons. The blankie I resolved to make out of approximately 847 separate squares and then magic together somehow when the time came, in the oh-so-far distant future. 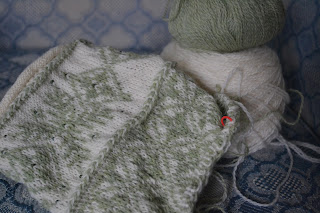 The future is now! Well, I want the future to be now. It's not, really. Of course it's not, did you see the list I just made of stuff with actual deadlines? Also, I will need to obtain about half a pound of black sockyarn, possibly more, although half a pound seems like a good start. I've got my eye on some, but haven't made my move yet. I've got a good quorum of sockyarn squares - last count was about 90, which doesn't seem like a lot compared to others' 800-square blankies, but a) my squares are a bit bigger than these, I think, and b) I'm not going for a twin size, I'm going for a throw that I can fit under if I tuck myself into the most compact fetal position I can muster. Right now the squares are laid out and are about fetal position size, and that will grow a bit when the black edging/connecting/crochetmagic happens. 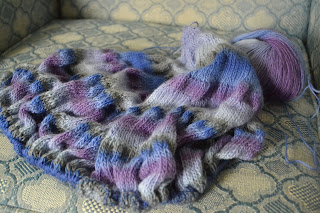 So, I got out the squares and used my now-pretty-much-unused office to lay them out beautifully on the floor and assess where we are, and then I got out a bunch more sockyarn ends that I can use to create more squares. And it turns out that recently I have violated my long-held rule of making absolutely sure that I would have enough yarn left over for at least one blankie square before finishing a pair of socks. Twice. No, three times. This means that, horrors, I'm going to have two different sockyarns in a single blankie square. Oh, how the mighty have fallen! Also, I can't find the rest of a ball I used to make my mom a pair of socks about two years ago, which is driving me crazy.
I blame all this on the addition to my life - no, the swallowing of my life - by the babychild. It was miraculous enough to be finishing a pair of socks that something had to give, and sockyarn blankie considerations are what fell by the wayside. We've gotten through the period during which the babychild had to be held - by me and only me - every waking second. This is a huge victory and allows for more knitting than the furtive middle-of-the-night, in-the-dark Citron sessions that were happening a few months ago. There was a very small window between the Holding All the Time period and the Eager Drooling Living-Room-Destroying Chaos Vortex Baby Godzilla phase, which I hear doesn't end until they're about 18. Or 4, maybe someone told me 4. Let's go with 4.
So now I can knit three stitches after removing the remote from the babychild's mouth, then another four as she goes for the bookshelf, then a few more after removing a paperback from her surprisingly-coordinated hands. There's actually a lag between when she obtains something that shouldn't go in her mouth and when she decides to put it into her mouth, so that buys me a few stitches. If I play my dinner card right, I can let her throw stuff out of the high chair for several minutes and knit in between bites. Some ground prep, like filling the coffee table with objects that are both throwable and put-in-mouth-able, buys me at least 60 seconds, although I still have to be vigilant for flying debris and accidental faceplanting. 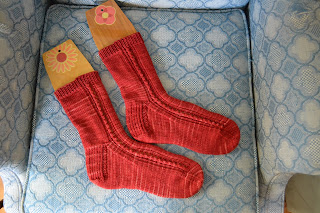 So there is more knitting happening, but it is much more harrowing and exciting. Amidst all of this, I'm standing there thinking, Yes. Now is the time to finish SockYarn Blankie and revel in its sentimental glory. Which, if you've been following at home, you can clearly see is completely unrealistic.
Also completely unrealistic: the idea that the blankie can be finished now - today! - and also include ALL of my sockyarn, even the stuff I haven't made into socks yet. Because that yarn is part of my yarn story, perhaps even more dwelled-upon than the sockyarn I've already used to make socks out of. How many ideas have I had for what to make my STR Falcon's Eye into? A skrillion. I can't have a sockyarn blankie without the Falcon's Eye! And yes, I believe I did just type the words "my yarn story." I haven't slept for 8 hours straight for over a year, people*. It's a miracle I'm still using punctuation.
ANYWAY, here's another weird thing that's happening. You know how people (nutritionists, doctor people, commercials for speed, whathaveyou) use that barrel and hose metaphor to illustrate the set point for your level of body fat to explain why diets don't work? I've never quite understood exactly how that barrel and hose worked, but I do now realize that there's totally a similar set point for sockyarn stash. Because I've done serious feats of stash strength by using up three skeins of sockyarn that have been available to be knit up for literally like 5 years, and now all I can think about is needing to replace it. There are over 20 other skeins to make into socks, and my finished socks to stash ratio has still been dropping given the lovely willingness of my mother to give me piles of sockyarn as gifts, and not having the Brick and Turquoise in my stash anymore has me feeling like I missed a meal. Noooo, self! Drill that hole lower in the barrel, or whatever metaphorical thing that would make sense in this analogy!
Clearly the answer is that I need to knit up 20 pairs of socks and then finish the sockyarn blankie. And the stocking, the primo heirloom lace blanket, the smashing Christmas gifts, and the Supervisor Citron. Perhaps a padded room for Baby Godzilla is in order, although after ten minutes she'd probably just eat her way through the door.
*Literally. This is real, I'm being real about this. No period of sleep lasting at least 8 hours for OVER A YEAR. Fear my giddy, non-sensical logic! Fear it!
Posted by MTB at 5:08 PM No comments:
Newer Posts Older Posts Home
Subscribe to: Posts (Atom)