a thrower, a flicker, and sometimes a picker

Let's start from the end, shall we?

Most recent FO: Ufserud. I know, right? Where the hell did that come from? Well, it came from my UFO pile, and the motivation for it came from a good solid two weeks with highs below freezing and reports of an upcoming low of -18F. -18! Foliage is lovely, yes, but wind cuts right through it, so yeowza, we need a wooly stranded hat, stat. I took pictures of it, but have no FO pics yet, as it's not quite finished blocking.

Holy cow, I haven't even written about Foliage yet. This is going to take awhile. 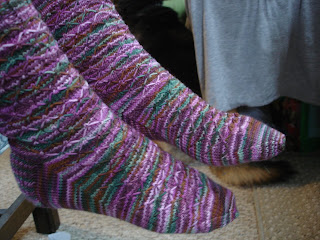 I flew back here on Christmas Day, and needed plane knitting desperately. I was the lucky recipient of three skeins of some BMFA lightweight, and cleverly used my Traditional One Present On Christmas Eve pick to select the most yarnly-shaped package available, so I was able to wind this up and have it ready to go for the plane.

Those crazy Ravelers in the Socks that Rawk group were just starting a Leyburn knitalong, handily saving me the need to make any kind of decision regarding what pattern to use. I hadn't intended to use my Highway 30 so quickly, but this just fell into place.

After knitting most of a cuff on the plane, I decided that the ribbing and pattern sections were both too big and pool-y, so I frogged the whole thing and started again. Oh well, at least it kept me from spending my time trying to smoke in the lavatory.

The KAL's open until the end of March, so if you have some STR and want to make Leyburns, get thee over there! It's a good read even if you don't want to play along. 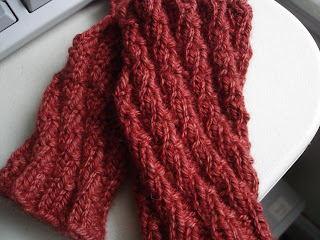 A classic from Last Minute Knitted Gifts, these were a very quick knit. I used my uber-score single skein of Road to China -- uber-score because I bought it on sale and with a store credit reward, paid like $6 for it -- it retails around $20. Unfortunately, getting the history-making discount was probably the most exciting part of this process. It feels great to knit with, and it's utterly gorgeous, but apparently the alpacas weren't baby enough to prevent the inclusion of guard hairs in the yarn. After spending more hours than I'd like to admit tweezing them out, these are definitely wearable, but man, these are a great reminder of the lesson I already knew: put down the alpaca. Just put it down. Stories with alpaca in them don't end well.

Oh, and the final nail in the coffin of this project was that after dividing the skein as evenly as I could, one mitt ended up half a 4-row repeat shorter than the other. Noticeably shorter. Doh. 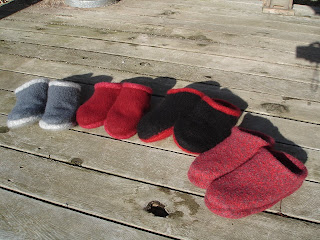 This was my Felt Clog Christmas. You should have yourself a Felt Clog Christmas asap, because they are fun and awesome. Except the part where you spend Christmas day checking the washing machine and wrangling soggy lumps of wool in and out of pillow cases, but even that's not so terrible. I think the family likes them.

Oh, and also! If you are in possession of five skeins of Wool of the Andes in Blackberry and are kicking yourself because you really wanted Lullaby, pm me! Because I did the opposite thing of that! And would like me some Blackberry clogs.

Oh, yes, and my final comment about all of these is that I found WotA to felt slightly better than Cascade 220. Them's might be fightin' words over on Rav, but here I can say it with impunity. Ha.

Oh, yes, and a postscript to my final comment: WotA in Dove Heather, the light gray in the clogs second to the left is just lovely. It's certainly sweater-worthy. It's the only Heather I used, but boy is it soft and nice. Maybe the others are too. 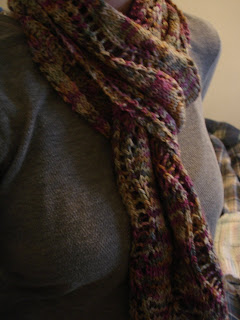 This sweet puppy is the Lace Ribbon Scarf in Sheep Shop 3. I cast on 35 sts (I think) after some kind Raveler who said she'd done the same thing and looked to have the size I was going for. I used basically the whole skein, and it's the perfect wearing-during-the-day length.

Sheep Shop 3 is just wonderful - it's got a great sheen, and the colors were very entertaining. 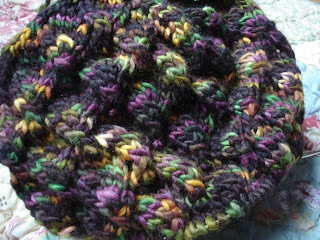 There -- imagine that done, and you have the idea. The lace pattern is pretty strong, so you can kind of see the leafy shapes despite the crazy color changes. It turned out to fit me a little more loosely than most people find it, so the lace isn't pulled open when it's worn. I really, really like the way it looks, and am thinking over some sort of cowl-y deal with the leftover 37g. 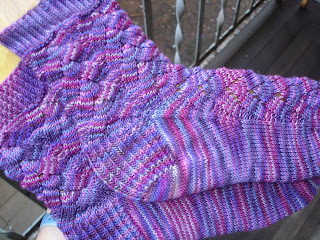 These were Mom's other Christmas present. Purple Rain STR lightweight. Made the cuffs shorter than I needed to because I was afraid of running out of yarn. 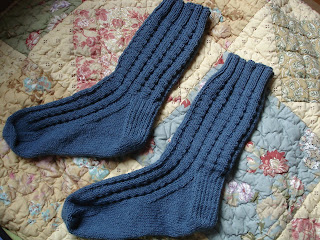 Oh man there is yet more. 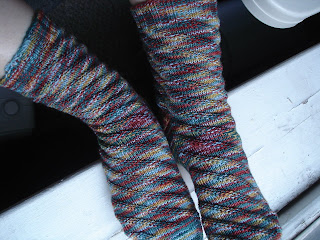 More STR: lightweight, Space Dust, RPMs with the modification detailed in Stariel on Rav's project page. (You take out one stitch after the ribbing, if I remember correctly, and then you don't have to jog at all? Not jogging is better than jogging.)

To my pleasant surprise, this is my second most hearted project. Why? No idea. But I'm glad people like them.

There is more -- how have I not blogged about my sweater yet? -- but moan, groan, thrash, I am done for the evening. I hope all y'all's holidays were awesome-o and that you've settled happily into post-Christmas knitting.
Posted by MTB at 10:13 PM No comments:
Labels: knitting
Newer Posts Older Posts Home
Subscribe to: Posts (Atom)