Where have I been?  Thanks for asking!  I've been off having my ass handed to me by a sock.  Well, a pair of socks.  That makes it better somehow. They are ganging up on me.

And I had a baby!  Yay!  She is lovely and wonderful and my whole life has changed and whereas before I could put up a decent fight with a pattern and come out generally whole and with a successful pair of socks on the other side, now...  my defenses are down.  I've only recently been getting enough sleep to function relatively normally, and it's been months (7, I'd say) since I got 8 hours of decent, uninterrupted sleep, and hey!  Sleep good!  Sleep make orooni function like person!  So.  Now knitting a pair of socks is a bloody, protracted battle with many long, dark nights of the soul and froggy froggy frogs and despair and wabu sabi and all the rest. 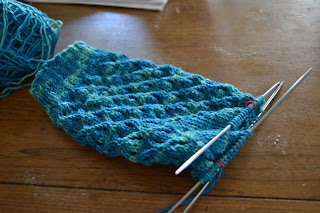 Looks pretty, doesn't it?  Oh, it would, the filthy sneak.  That picture was taken in a moment where I'd won many battles and, in a horrifying moment, turned around and realized I'd accidentally invaded Canada.  Or something.  And the Canadians are all like why, why are you doing this to us, and I'm all like, there!  Take that!  Roar!  And then I realized that the sock would be way too long if I kept up in this direction, given that the triangle-y stockinette part was nowhere near close to being done but the cuff was bordering on too long.  And then I had to, like, give back a bunch of Canadian towns and build hospitals and release statements about regrettable actions and convince everyone not to bicker and argue about 'oo killed 'oo, etc.  Or, non-metaphorically, rip out a bunch of the sock.

And doing that was very painful and difficult for me, because I had used a lot of car ride time (just about the only knitting time in the first 4 months or so of baby's life) and 96% of my available brainpower on getting to this point.  So I took a picture before frogging, to make myself feel better.  And from this vantage point, the point at which I have finished all but the grafting on both socks, the above picture doesn't really look all that impressive, but that knitting was hard-won.  I had knit that sock and was wearing clean-ish clothes and the baby was fed.  WINNING.

Only not, because I wasn't shooting for thigh-highs.

Also, there was a sickening moment about halfway through one foot where I decided to try on one sock and thought that perhaps if it didn't fit somehow I'd probably give up knitting.  It did, though, thank the muses.

So, I frogged this sock after knitting 1 1/2 repeats of the first chart because I read a bunch of comments on project pages and decided to knit a S instead of a M (60 sts instead of 66) and agreed that the M seemed very big and stretchy.  And then I ripped out another whole repeat of the first chart, on both socks, because the cuff was coming out too long.

And pretty much the only reason I kept going on these was because I love this yarn, think it's the prettiest yarn on the planet, and already had partially knit it into socks that didn't make it onto their own project page and I didn't want to be beaten by a second pattern with the same yarn.

Am I still talking about these socks?  I am?  Sorry.  Also, I haven't taken a more recent picture and there's a baby asleep across my lap so this is not a very exciting entry.  And I haven't even linked the socks.  So here.  These are Solid Socks Mystery Feb/Mar 2011.  Barring a terrible, unthinkable disaster, I will graft their toes sometime in the next week.

Okay, here are some socks: These are Hermione's Everyday Socks, kind of - I didn't even read the pattern for things like ribbing, heel, or toe instructions because right now I'm functioning in a world where anything outside of my heel stitch heel flap and normal normal normal sockmaking means that the designer probably wants me to die.  If there's arch shaping, it's because they want me to suffer deeply before I die.

Uh-oh.  Babychild's awake, which means that it's time to get ready for bed.  More to come, now that I remember that I have a blog.