You know how you go along thinking, oh man, I wish I had a pet ferret? And how it would be so great, and she would live in my apartment, and I would name her Daisy and we would watch TV together? And then you get a ferret and name her Daisy, and then about a week later you realize that Daisy the Ferret eats a *lot*?

After accidentally staying up really late getting this sucker started, I've done a row a day of the Vertical Vintage Stripes afghan. 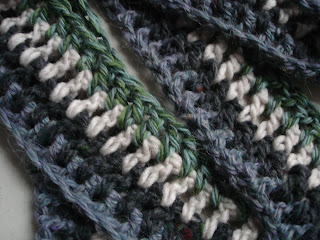 aaaand I'm pretty much out of yarn for it, at least that's easily handy and not slated for some other project.

This gives me a good excuse to haul out the rubbermaid bins that hold everything and reassess. I really want to keep working on this, and there's got to be stuff that I'm not remembering that's left over from other projects. And there's a bunch of yarn I got pre-Ravelry that's not in my Ravelry stash that I'd like to put there.

Here's a question for any readers*: ought one combine superwash and non-superwash yarns in the same afghan project? My instincts say no, because when it inevitably gets thrown in the washing machine, half of it will felt and render the whole thing trash. If the whole thing felts, it'll become a floor mat or dog blanket, and if the whole thing doesn't, no problem at all.

The other half of me suggests that it's silly to think that it will ever be thrown into the washing machine to felt, because I wouldn't do that and thus far my husband has successfully employed the "Ask Before Washing" rule.

Erring on the side of caution and making two leftover blankets, one all superwash and one all plain wool, seems prudent here. However, it will take a really long time for either of those blankets to get finished. Hmm.


*Ireally do appreciate the answers I get to my various questions, even though asking a question seems to informally result in whatever the project is getting put aside for about 5 years.
Posted by MTB at 4:54 PM 1 comment:
Labels: crochet
Newer Posts Older Posts Home
Subscribe to: Posts (Atom)