I've mentioned before how half the fun of knitting is thinking about and planning which yarns to pair with which patterns, and this is especially true of sock yarn because you don't really have to worry about yardage.  But  I've been acquiring yarn at a faster rate than I can knit it, and it's gotten to the point where I think "but if I knit that, I won't have it in my stash anymore!"  And that's crazy.  So, we're not stopping with the Fleece Artist Melon from 2007, and if I'm to come anywhere close to success with the 26 Pair Plunge, more stash is going to need to move on into the next phase of existence, i.e. sockdom.

Sock Knitters Anonymous has "Knit All in Red" as its challenge for this month's Sockdown, and I just happen to have a beautiful skein of Brick in BMFA lightweight that's been chilling in the stash for at least 5 years.  So now is the time.

Now is also the time for Christmas knitting, especially given the fact that I really have lamentably little time to knit these days.  Oof, I miss it.  There are extravagant plans in the works for Christmas, and there's more time to think about knitting than to actually knit.  In desperation, I've considered pulling out the sock on the commute to work, but don't worry, I didn't.  (The drive is so short it wouldn't be worth it.)

One: I worked my fingers off last night finishing the Menehune Cobblestone Slogs I'd started in black yarn for Other back in May.  It was August, the month of finishing SIPs for SKA.  I finished weaving the last ends in at 11:53pm on the last day of August and pulled out the laptop to post a finished pic in triumph.  And of course the internet wasn't working.  I restarted the computer, troubleshot, cursed August, and generally anguished, the clock struck midnight, and I went to bed having failed.  Got up this morning, noticed that the wireless button on the keyboard was orange when it's usually white, pushed it, and viola: internet.  Steempy, you idiot! I said to myself.

Two: I chose to compete in the Ravellenic Games with this WIP from a zillion years ago (well, 2008.)  I finished the knitting, wove the strands, finished more knitting, wove in a billion ends, wet-blocked it, then a) didn't post it for a prize, and b) realized that this is so scratchy that I won't ever be able to wear it around my neck, which is unfortunate given that it's a scarf.  And that for the amount of work in it, I could've made an afghan instead. 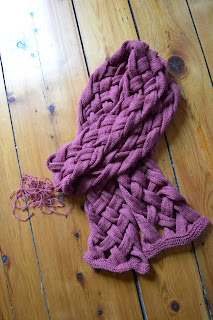 The yarn is part alpaca, which I don't really get along with, even supposed baby alpaca.  Perhaps that's the part that makes it seem scratchy to me?  Perhaps this would feel like the pelts of baby bunnies to a normal person?  I don't know.  I may bathe it with some conditioner (which has tamed even Jamieson's Sheltand Spindrift, which I thought was impossible) and put it up for sale.

Finally, in a story not thematically tied to the first two through incompetent boobery, I have finished another reeeeeaaally old Work In Progress: 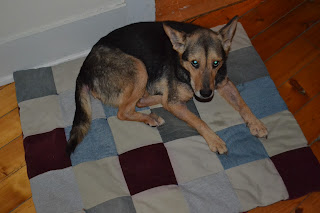 and the dog says thank you very much.  The squares are from our old clothes, the back is part of an old sheet that one of the dogs put a big hole in many years ago, and the batting is the nice puffy, lofty stuff I use for dog blankets these days.  (Our dogs are old.)  Much of my free crafting time the last couple of weekends has gone towards repairing the other dog blankets I've made because they've taken a beating recently.  Luckily, I love how patches look.  And I hope that many years from now, the quilts I've made that actually follow the conventions of good quilting are the ones that survive, because I was seriously just making up techniques and going with "I Have 10 Minutes to Fix This" Chic for some of this stuff.

Now to finish the laundry before Baby wakes back up.  Yay for naps!
Posted by MTB at 4:46 PM No comments:
Newer Posts Older Posts Home
Subscribe to: Posts (Atom)