In which I nearly Kinnear Ysolda Teague, but decide that I'm not a celebrity stalker and also I couldn't get my camera out fast enough.

Dude. I went to Rhinebeck. 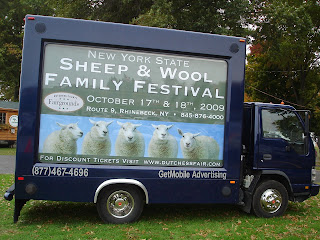 And what do people do at Rhinebeck? 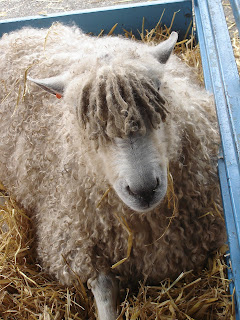 They take pictures of sheep to post on their blogs. (Check aaaand check.)

Other & I went on Sunday. There was not, in fact, a trail of bodies leading directly to the STR booth, but maybe we got there late enough that the dead had already been carted off. The booth was pretty wonderful, and I'm lucky that the only BFL sport they had was a variety of browns, because otherwise it would have been significantly harder to talk myself out of them. I did do a very good job of not gathering up a big pile of STR and burying my face in it for all those wool+vinegar fumes, if I do say so myself. It was very exciting to see all that Blue Moon in person.

I got some Corriedale from Wild Apple Hill Farm -- "Coral" is pictured below, and I got another skein of "Natural," which I wish were called just "Sheep," because that's what it is. 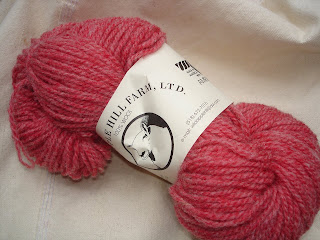 At the booth, I tried to convince myself that this was not pink -- no, no, it's a light red, see -- but in this picture, its pinkitude is undeniable. So be it. It is pretty.

My other purchase was some Malabrigo Sock in Solis: 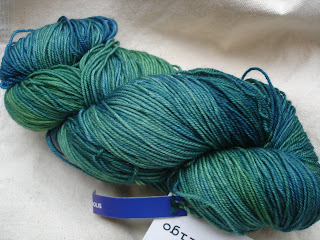 And yes, it is probably kind of silly to get up at the crack of dawn, drive miles and miles and miles, and out of thousands of skeins of yarn, pick something that I could easily get off of the internet. (And theoretically at a LYS, although I've never seen this colorway at any of the ones I've ever gone to.) I overcame that very rational argument with the power of Sweet Holy Moses, This Yarn Is Gorgeous And Mom Said I Could Pick Out A Christmas Present Here. Merry Christmas to me.

I have plans for it - oh, do I have plans - but I cannot reveal them until several other things have been revealed.

Overall, I'm very glad we went. I've never before lived anywhere particularly close to any of the major fiber festivals, so we felt the need to jump at the chance to go when we could. It was cool to be in a place where handknit accessories outnumbered machine-made ones, and it was the perfect time of year to be outside at a fair. It probably won't hurt not to go to another one for awhile, because the allure of spinning is getting harder and harder to ignore.
Posted by MTB at 9:10 PM No comments:
Labels: knitting, yarn
Newer Posts Older Posts Home
Subscribe to: Posts (Atom)